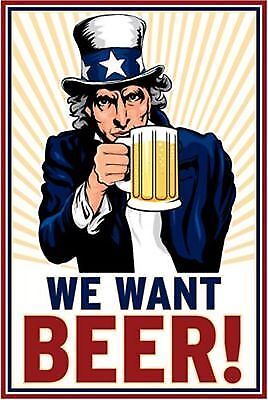 People search out collectible beer posters and prints to put on their walls to decorate a room. Others squirrel them away in albums as an investment or to protect them from fading or tearing. Besides posters and prints, additional breweriana available include commemorative cans, ashtrays, bottle caps, coasters, coolers, and more.

Can you find a beer poster from another country?

Yes. For example, you can search for a beer poster for countries that include Japan and Australia.

What types of rare posters are available?

The Morning Advertiser, the United Kingdoms leading daily journal of the pub trade, announced that someone had discovered a series of rare, vintage tavern posters. In the early 1950s, the Brewers Society commissioned a series of 20 posters that listed information on how ale is brewed. The posters promoted beers and pubs. Some of the titles of these works include, "Going Hopping," "The Guvnor," and the "Welcome Inn." Another print displays a copy of the Morning Advertiser on its cover.

A series of 18 prints promoting Shepherd Neame, a brewery based in Kent, was found on the Isle of Sheppey when someone was clearing a house.

What are some of the different kinds of beer posters?

You might find a 17-inch metal sign with pictures of toucans, a bird made popular in ads and signs promoting Guinness stout. In 1975, Schlitz Malt Liquor produced a 16-inch by 17-inch lighted sign in blue and yellow. You might find Jimmy Buffet decals bearing the "Margaritaville" theme, which were designed to post on the rear or side windows of vehicles. In the sign collection, you also might come across an inflatable hanging seaplane shuttle bearing the Corona Palm Tree, a Budweiser clock, or a 25-inch Budweiser blimp for hanging in a man cave.

Are there beer posters that mention songs?

Yes. Among the titles are "Irish Drinking Songs," a "Christmas Canjo Songbook," and "The Alice Angel Song" ("Angel of the Stage," the "Bendy and the Ink Machine Song"). The Hams Bear Clock was immortalized in the 1982 recording by David Frizzell, "Im Gonna Hire a Wino to Decorate Our Home."