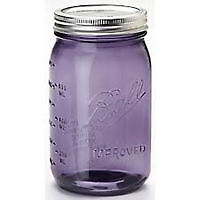 A Quick Guide to Collectible Jars From 1900 to Now

Canning jars are one of the few products that have changed very little in style since they were invented in the 19th century. These antique Mason jars have traditionally been used for a host of different purposes, ranging from pickling food to arts and crafts designs. Though collectible Mason jars are valued for their aesthetic appeal and heritage, their contemporary counterparts can be used for any and all of the same purposes.

Are Mason jars the same as Ball and Kerr jars?

John Mason patented the canning jar in 1858, and the Ball brothers patented their own design in the 1880s. Canning jars manufactured by Ball and Kerr, however, are still called Mason jars. Ball and Kerr products are manufactured by another company altogether. The Mason jar company has differentiated itself by producing commercial canning jars and lids for food fermentation at home. This company also makes specialized, long-lasting lids that enable the Mason jars to be used for short and long-term food storage.

What are the differences between antique and contemporary glass jars?

Where contemporary glass jars have paper labels, glass Mason jars from the early 1900s that are now collectible did things a little differently. They listed the name of their product, the location where it was manufactured, and the company name in raised letters on the glass itself. The shapes of the jars were not universal and differed in height, width, curvature, and accents from product to product.

Until recently, the color of old Mason jars provided some indication of their age and collectability. The chemical composition of the materials used to make the glass cast a blue, green, purple, or amber hue to the glass, which makes them easily identifiable as antiques. In some cases, markings also indicate the age of the containers. Besides trademark and patent stamps on antique glass jars, you might notice seam lines that indicate that it predates mass production. Wide-mouth jars are a more recent design, although the first wide-mouths were made by Kerr in the early 1900s. Neck threads also indicate the age. The two-piece lids and rings used today werent available until the 1910s, and its still in wide use today.