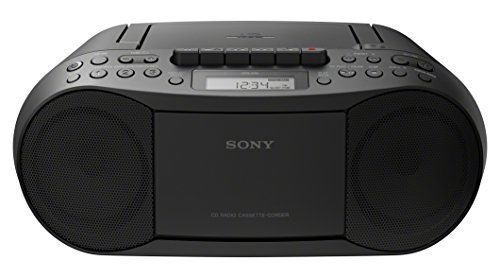 The radio has become a common source of entertainment for many generations, and advancements in technology have helped further this invention over time. Sony stereos and boomboxes have AM/FM tuners, and they also can play many devices with cassettes, CDs, and the USB stick. From high-fidelity sounds and mega bass to high-definition sound, boomboxes have added various features to the device to allow them to become more powerful, compact infotainment gadgets.

What are some features of Sony boomboxes?

Sony boomboxes and portable stereos arent limited when it comes to features. Unlike classic boomboxes that only played cassettes and CDs, modern devices are equipped with Bluetooth technology as well as jacks to play through an MP3 player. Boomboxes also have other features aside from their ability to play different types of music. It features preset stations you can customize to listen to your favorite radio stations with one click. Some Sony boomboxes also have a built-in sleep timer so your music stops playing after a specified amount of time. Other boomboxes can record music from CDs onto a USB device.

Do Sony boomboxes have a digital screen?

Most boomboxes have an LCD screen that shows the time, but this may vary from one model to another. The LCD screen also displays the preset radio stations and allows the user to change the settings when the boombox is turned on and is in use. The benefits of the LCD screen are that it will offer visual cues on the playing station, and it will allow the user to keep watch over the battery percentage while its in the portable mode.

What can be used to play music through the boomboxes?

The boombox has continued to evolve technologically with the quality of sound that it offers and the style and design of the device. It has developed into an output gadget that can play music from a Bluetooth smartphone or iPod as well as cassettes and CDs. The Sony speakers are designed to produce a high-quality sound that can reach high decibels for its size. For a more personal approach, there is a headphone jack that allows it to be used in quiet settings where music or loud noise is not prohibited. The Sony speakers can also be used for parties or any musical event in larger environments.

Can you plug Sony portable stereos/boomboxes into the wall?

Yes, the stereos and boomboxes can be plugged into the wall because they come with a cord for non-mobile music playback. This makes them an ideal CD player for a dance crew or for a listening class where the wall plug is far. However, theyre meant to be used as a portable audio device, which allows them to also use batteries as an auxiliary power source.

Content is for informational purposes only. eBay is not affiliated with or endorsed by Sony.