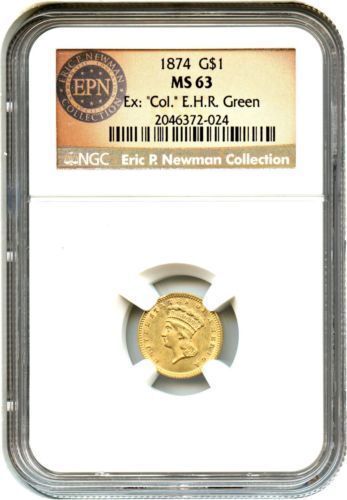 The $1 gold piece was produced by the United States Mint from 1849 until 1889. Intended to be used as regular currency, the gold dollar was issued in three types. Some American gold coins were melted down shortly before the Civil War for their value, and for a while, it was popular to incorporate these dollar coins into jewelry.

What are the different types of American gold dollars?

How rare is each type of United States dollar coin?

What does the original Type 1 dollar coin look like?

Lady Liberty is facing left and wears a small crown. Her head is surrounded by 13 stars that represent the original 13 colonies. These dollar coins were much smaller than other currency in circulation at the time.

Where were the gold coins minted?

Why do some dollars have holes in them?

People drilled holes in the coins so that they could be worn on necklaces.

What is the wreath on the Indian Head dollar?

The reverse of the Type 2 and Type 3 dollar coins was designed by James B. Longacre. The wreath is made of corn, cotton, tobacco, and wheat, the major crops from the North and South.

Who is the Native American princess on the dollar coins?

She is not based on a real person. The designer wanted to depict Liberty as a Native American, but the fanciful headdress doesnt resemble anything used by an actual native tribe.